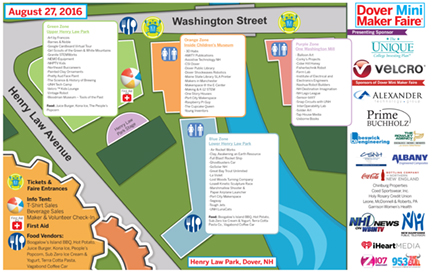 You won’t have to wait till Saturday to plan your visit to the 4th annual Dover Mini Maker Faire! We’ve got your programs here, and below. We were just looking through the schedule and noticed that almost HALF of the Makers this year are NEW to the Faire and have never participated before. That says a lot about how creative our local community is. Let’s celebrate that innovation in a big way this Saturday!

Share the Faire with your friends, and buy your tickets today!

All Day – Rocket Launching
Lower Henry Law Park
Create and test your own paper rocket with the folks from Air Rocket Works!

All Day – North East Ghostbusters Alliance Taskforce Ecto
Roaming throughout the Faire
Find them as they look for goblins, ghosts and ghouls. They’ll test your psychic powers and may even have a treat for you! Be sure to ask about and collect their personalized trading cards too! The Ghostbusters love to chat about their gear and how it’s made!

10:30am – Story-Telling
Inside the Children’s Museum of NH
Join 16 year old author and illustrator Lauren Tarbuck as she reads from her book “Room of Shadows”, a story about five year old Maria who is afraid of all the shadows in her room and what her mom does to calm her fears. 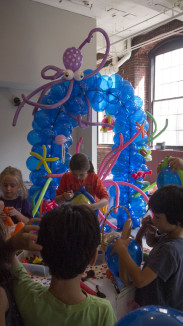 10:30am – Balloon Artist Terri Marsh
Inside One Washington Mill
She’ll teach you how to make your own balloon creations!

11am-3pm (runs every 30 minutes) – 7th Settlement Brewery Tours
On location across the street from CMNH. Sign up at their booth in Henry Law Park
Join 7th Settlement brewers for tours of their micro brewery and learn about the science and history of brewing.

11am – NAO Humanoid Robot
Inside the Children’s Museum of NH
Learn about and see NAO, the world’s leading humanoid robot perform live!

Noon – Sub Zero Ice Cream Stage Show
Henry Law Park Stage
Sub Zero will show you how “cool” science can be! We’ll explore the states of matter, the relationship between volume, pressure and temperature and even the Leidenfrost effect. With visual experiments performed before your eyes, you get to interactively participate by providing your hypotheses as to what the outcome of the experiments will be!

12:30pm – Balloon Artist Terri Marsh
Inside One Washington Mill
She’ll teach you how to make your own balloon creations!

1pm – How to Publish A Book
Inside the Children’s Museum of NH
Have a great idea for a book but don’t know how to get it published? Children’s author Layne Case, owner of AMITY Publications, will lead you through the process of how to become a published author.

1:30pm – Ghost Bubbles with the Ghostbusters!
Henry Law Park Stage
Who you gonna call when you want to create some swirly, whirly ghost bubbles?

2pm -Short “Short Film Festival”
Inside the Children’s Museum of NH
“Signing” by Gina Catalfo Nelson. “Rocketship” by Alfred Thomas Catalfo. Excerpt from “The Man Who Wasn’t Tex Magru” by Narrow Street Films. Films will be followed by a Q&A with the Directors.

2:45-3:30pm – Build Your Own Egg Drop Container
Inside the Children’s Museum of NH
Can you create a container to keep little Eggie safe from a drop off the Museum roof? We will find out at 3:30pm when we launch our design from the front of the Museum!

3pm – Narrow Street Films Stunt Team
Henry Law Park Stage
The NSF stunt team has been creating stage and film action pieces for close to ten years and have over 100 years combined martial arts experience. Join them for a workshop to learn the ins and outs of making a cool, dynamic and dangerous (looking) action scene.

3:45pm Egg Drop Launch from the Children’s Museum Roof!
Whose egg-saving designs will survive the three-story drop? Come and find out! (Workshop to build your own egg drop container is from 2:45-3:30pm inside the Museum.)